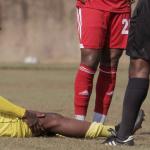 The Zimbabwe Football Association (ZIFA) has issued an update on Warriors midfielder, Kudakwashe Mahachi who left the pitch injured in a friendly match against Sudan on Sunday. ZIFA posted an update this Monday:

Update on Kudakwashe Mahachi’s injury. He is expected to shake off the thigh contusion from yesterday’s match vs Sudan in the next three days.

There were fears that the injury could be serious.

Fans were worried given that Zimbabwe is already without some of its key players including Khama Billiat, Tendayi Darikwa, Marshal Munetsi, Marvelous Nkamba and Brendan Galloway who are out over various reasons.

Meanwhile, it is not yet clear whether the Warriors will take part at the tournament or not after FIFA threatened the Sports and Recreation Commission (SRC) with unclear sanctions for suspending the ZIFA board over maladministration.