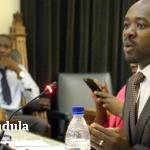 The organiser of the gofundme initiative, T Basvi, says the drive to buy Chamisa an armoured vehicle was triggered by “countless merciless attacks (on Chamisa) by the ruling party, aided by the government security sector.”

He cites an attack on Chamisa’s convoy on the 11th of October 2021 by a group of suspected ZANU PF youths as evidence that Chamisa’s life was in danger.
The attack left Chamisa’s vehicles damaged and many of his aides seriously injured and hospitalized. The convoy was on its way to engaging the rural community in Masvingo to understand their issues in the aftermath of the pandemic’s 3rd wave.
Basvi believes chances that violence will intensify during the 2023 elections are high hence the need to beef up Chamisa’s security before any unfortunate eventuality occurs. Basvi added:

He also said it was clear that the regime wants to continue to frustrate democracy by attacking the main opposition.

So when do expect to see the armoured vehicle

US$4.00 Harare
Stage-managed 5 months ago

This is the best way citizens have converged for something meaningful. Let's converge again like this for our election agents. Change is possible in our lifetime