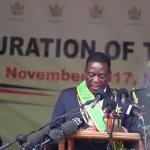 Four United Nations special rapporteurs have expressed concern over plans by the Zimbabwe Government to bar NGOs from receiving external funding, or involvement in partisan politics.

The Government is working on the Private Voluntary Organisations Amendment Bill, 2021, which according to activists, will interfere with the operations of NGOs if passed into law.

The Government, however, says proposed amendments seek to combat money laundering and financing of terrorism in Zimbabwe through Private Voluntary Organisations (PVOs).

They raised concern over the existing definition of “private voluntary organization” in Section 2(1) of the PVO Act. The UN officials said:

We are concerned this might create uncertainty about the law’s scope and make it difficult for organizations to discern their legal obligations and act accordingly.

This could also lead to broad interpretations from relevant administrative and judicial bodies, giving them wide discretionary powers to apply the law and impose burdensome requirements on a diverse group of community and informal associations that are currently excluded from regulation.

Moreover, Clause 2 of the Amendment Bill also reforms exemptions for common law Universitas organisations and Trusts registered before the High Court, which are currently excluded from registering under the PVO Act.

According to an online source, Universitas are organisations that have a common-law persona but are not registered or regulated by any enacted laws.

If the Amendment Bill is passed, Universitas organizations will be subjected to the registration requirements, control and regulation by the Registrar and the Minister.

The four UN special rapporteurs said these provisions may serve as the basis for restricting the operation of many NGOs, including human rights groups, currently operating as Universitas organizations.

The Private Voluntary Organisations Amendment Bill also proposes that the Minister will undertake a risk assessment of all PVOs at least once every five years.

Based on a risk assessment, the Minister may decide that certain sectors or types of PVOs are at high risk of being used by terrorist organizations for their nefarious activities.

The UN officials said the risk assessment designation is vague and gives the Minister broad powers that he may use to limit the civic space. Read the letter.

The ambiguity of the risk assessment designation as provided in the Amendment Bill is particularly worrisome in light of the broad power granted to the Minister to “prescribe such additional or special requirements, obligations or measures” to a high-risk entity.

We are seriously concerned that the overall prospective impact of the Amendment Bill, would likely be detrimental to civic space in Zimbabwe.

I think mface uyu haana problem but is being given the wrong advice how can he say no to funds from other countries just look at the Global Fund which fund especially the health do you see the countries inscribed on those vehicles they use at the health department kunanaNewstart kwese uko malaria,T.B ,H.I.V , family planning ingori USAid ,Ukaid anaSweden , Australia , European countries especially . KuW.F.P it's the same so foreign funding of N.G.Os yavasingadi ndeipi. All N.G.Os in this country are getting foreign funding kana musingadi why not ban the likes of UNICEF,W.F.P,IOM and United Nations it's self don't make noise 🇦🇺🇺🇸🇬🇧🇫🇮🇪🇺

I AM AT A LOSS AS TO WHY THIS NEW, SORRY, IT IS NO LONGER NEW, BUT SECOND ADMINISTRATION, ALWAYS CREATE QUESTIONABLE LAWS AND THE SAME TIME APPROACH UNITED STATES OF AMERICA, ENGLAND AND EUROPEAN UNION WITH BENDED KNEES ASKING THEM TO REMOVE SANCTIONS.

FROM MY KNOWLEDGE NO NGO HAS BEEN ARRESTED, INVESTIGATED AND PROSECUTED. GOVERNMENT HAS BEEN PILING UNFOUNDED ALLEGATIONS AGAINST NGOs OF SUPPORTING OPPOSITION POLITICAL PARTIES. AND FUNDING THEM.

THESE ARE THE LAWS WHICH MAKE ENGAGEMENT AND REENGAGEMENT PROCESSES A MOCKERY. THOSE COUNTRIES WHICH IMPOSED SANCTIONS HAVE ALWAYS QUESTIONED SUCH LAWS WHICH INFRINGE POLITICAL SPACE.

Indeed you are a BUSH LAWYER..... KKKKK