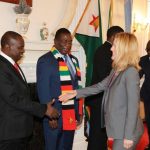 The United Kingdom (UK) has claimed that its sanctions on Zimbabwe are asset freezes and travel bans on 5 Zimbabwean individuals for corruption and rights abuses.

UK dismissed claims by the ZANU PF government that the sanctions are behind Zimbabwe’s economic woes as they have, among others, blocked trade. In a series of messages on Twitter, the UK embassy in Zimbabwe said:

Let’s get this straight: the UK imposed asset freezes and a UK travel ban earlier this year on 5 individuals for corruption and serious human rights abuses. The UK has no economic sanctions on Zimbabwe #itsnotsanctions.

The facts: trade between the UK and Zimbabwe was 244m USD last FY, with Zim exports to the UK reaching 55m USD.

The UK and Zimbabwe have a bilateral trade deal which gives Zimbabwe duty & quota-free access to UK markets.

Meanwhile, the United States of America said its sanctions on Zimbabwe were imposed to encourage good governance and to foster democracy. Said the US embassy in Harare:

Advancing democracy, promoting human rights and protecting fundamental freedoms continue to be top priorities for the United States. America stands with the Zimbabwean people as you strive for a more democratic and prosperous future.

These statements when Zimbabwe and the rest of SADC are commemorating the Anti-Sanctions Day (25 October).

They are also issued when a United Nations special rapporteur, Alena Bouhan, in Zimbabwe on a 10-day visit to ascertain the effects of sanctions imposed on individuals and some corporates in the country.

They are other sanctions which are destroying the economy. The US & UK just want regime change. Although Zanu Pf is corrupt, Zimbabwe will never be a colony again

Zanu PF government is destroying our economy through looting and corruption. Zimbabwe is now a Chinese colony and our own people are suffering in the hands of the heartless and ruthless China people. Zanu must drive out all forms of criminality they are creating daily and stop blaming innocent people whom they know have the potential to bring our beloved country back on its feet.