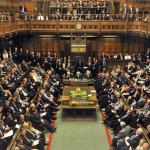 The UK’s ruling party, the Conservative Party, lost the North Shropshire seat they held for nearly 200 years to the Liberal Democrats.

The seat fell vacant following the resignation of Owen Paterson, the MP for North Shropshire since 1997, who was found to have breached parliamentary rules on lobbying.

According to BBC, the North Shropshire seat has existed in some form since the 1830s and, until Friday, had always had a Conservative MP.

The area voted strongly in favour of Brexit in the 2016 referendum, but this did not stop the pro-EU Lib Dems from taking the constituency.

The by-election was held two days after British Prime Minister Boris Johnson experienced his biggest rebellion in office when 100 Conservative MPs voted against the government’s proposals to introduce COVID-19 passes in England.

It also followed rows about a Number 10 Downing Street ( the official residence and the office of the British Prime Minister) Christmas party during lockdown restrictions last December.

The people of North Shropshire have spoken on behalf of the British people. They have said loudly and clearly, ‘Boris Johnson, the party is over.’

Your government, run on lies and bluster, will be held accountable. It will be scrutinised, it will be challenged and it can and will be defeated.