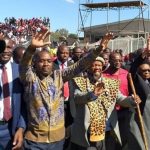 Ousted Ntabazinduna chief Nhlanhlayamangwe Ndiweni on Thursday last week led a group of demonstrators to the Zimbabwean embassy in the United Kingdom (UK) calling for President Emmerson Mnangagwa to be barred from participating at the Climate Change Conference (COP26).

COP26 will be held next month on November 23 and 24 in Glasgow, Scotland, and Mnangagwa has been invited to attend.

But last Thursday, Ndiweni led a group of demonstrators at the Zimbabwean embassy in the UK and later handed over a petition to UK Prime Minister Boris Johnson.

Ndiweni told the protesters that climate change issues in Zimbabwe could only be dealt with effectively by a government that respects the rule of law, “a government underpinned by democracy.”

He added the ruling ZANU PF was not democratic. He said:

The meeting requires honesty and some form of legitimacy, but currently, in Zimbabwe, we do not have that. So we are raising our voice in a democratic country here in England to say that the presence of the so-called President of Zimbabwe is not acceptable among the brotherhood and sisterhood of nations. He (Mnangagwa) cannot sit at the table among other such nations. So we are raising our voices to say we reject him.

Last month, Mnangagwa met the British ambassador to Zimbabwe Melanie Robinson in Harare in preparation for the United Nations Climate Change Conference of the Parties (COP 26).

The Zimbabwean government viewed the invitation as a step towards re-engagement with the international community.

Ndiweni who was dethroned by Mnangagwa’s government as a chief is now based in the UK.