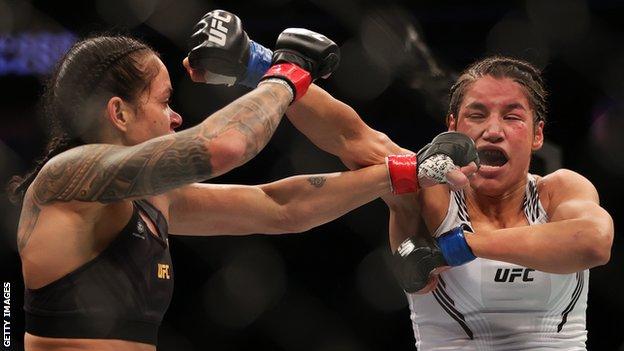 Pena pulled off one of the biggest upsets in MMA history when she defeated Nunes, who was unbeaten in 12 fights and had held the belt since 2016.

"Amanda isn't used to fighting girls like her, so I think Pena will win again," he told BBC Sport.

"I wasn't surprised at all with Pena winning - I know how good she is."

Nunes has already expressed her interest in a rematch and there are rumours the bantamweight duo are set to be the coaches on the upcoming season of reality TV series The Ultimate Fighter (TUF).

Pena told BBC Sport she was hoping to be part of TUF and fight Nunes in August.

Muhammad, who faces Vicente Luque in a rematch this April, says the 'The Venezuelan Vixen' has inspired him.

"After seeing her defeat the GOAT like that and to beat her in her own game, it was like so much motivation coming from there," he said.

"She's tough. I sparred with her before the first fight and she's not afraid to get punched. She's not a fighter that is going to back down."

Undefeated in seven fights, Muhammad sits at number five in the UFC welterweight rankings - arguably the most competitive division in MMA.

Colby 'Chaos' Covington and Jorge 'Gamebred' Masvidal are also in the division and the former team-mates will meet in the main event of UFC 272.

Despite Covington being a heavy favourite to beat Masvidal in their grudge match, Muhammad believes 'Gamebred' is being underestimated.