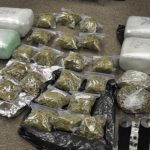 Two Zimbabwean nationals have been arrested at Mumbai’s Chhatrapati Shivaji International Airport, India for possession of a large consignment of drugs.

According to officials, the Airport Intelligence Unit (AIU) took this action on the input of The Directorate of Revenue Intelligence (DRI).

This is the first case of seizure of such a large quantity of drug consignments at the airport so far. The two arrested Zimbabwean nationals have been identified as 46-year-old woman and a 27-year-old male passenger.

Both have been taken into custody by the Airport Intelligence Unit.

Both the foreign nationals had left Harare in Zimbabwe and had arrived in Mumbai after receiving the consignment at Addis Ababa. The case has been handed over to AIU by DRI.

The identity of the duo has not been disclosed.

YESTERDAY IT WAS A ZIMBABWEAN MAN ARRESTED FOR CHILD TRAFFICKING IN BOTSWANA.
YOU ARE MAKING IT HARD FOE OTHER ZIMBABWEANS TO GET VISAS KUSOUTH HAMUCHADIWE.