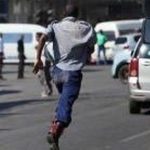 The Zimbabwe Republic Police (ZRP) Friday last week arrested two armed robbers who were masquerading as police officers. The duo is said to have been involved in several robbery cases. Said the police in a statement:

On 22/10/21, police in Mutawatawa joined hands with members of the public and managed to arrest two of the several armed robbery suspects, Chikomborero Gono (28) and Luckson Tsingano (32) who were masquerading as police officers.

The suspects robbed Tinotenda Karumazondo (21) employed at a local gold milling company of USD15 000, 49g gold and a cellphone before kidnapping him, tying him with shoelaces and spraying him with an unknown substance that made him go unconscious.

A member of the public sustained a gunshot injury on the palm during the exercise. The two suspects are assisting the police with investigations whilst the other suspects are at large.

This comes after police announced the arrest of a syndicate that was dealing in guns. Two police officers who were part of the syndicate were also arrested.

Police said some of the guns were being sold to armed robbers.

Cases of armed robberies have been on the rise in the country lately.

Chinjai maitiro imi mapurisa. We know all that you are subjecting innocent people to.
Sungai mbavha dzagwadamisa nyika.
Start from the top.
Stop being partisan.

Unemployment is forcing people to do dirty works