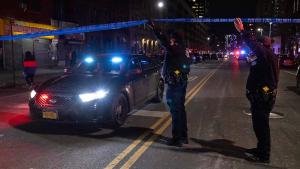 Two New York City police officers were shot in a Harlem gunfight Friday night — one fatally and one critically wounded — days after a 16-year-old boy allegedly wounded another officer in the Bronx, according to police sources.

An NYPD spokesperson confirmed that two officers had been shot near 119 West 135th Street in the NYPD’s 32nd Precinct but said their conditions were not immediately available. They were rushed to Harlem Hospital.

Despite earlier indications that both officers had died, NYPD Commissioner Keechant Sewell said during a late-night news briefing that one had died and the other was fighting for his life.

She said the slain officer was just 22 years old.

Officers arrived at an apartment in response to a domestic violence call involving a mother and her son at around 6:30 p.m. Friday.

NYPD dispatch logs obtained by Fox News Digital show the call came in from a woman having a dispute with her son.

Police said the mother had no injuries and no weapons

Police arrived and met the caller and her son. After a brief conversation, she told the officers her other son, who had been involved in the dispute, was in the back bedroom.

One officer remained in the front of the apartment as the other two went down the narrow hallway to the back bedroom – and the suspect kicked the door open and began firing, according to authorities.

As he tried to leave the apartment through the front door, the third officer shot him twice.

Police said they recovered a stolen .45-caliber Glock handgun with a high-capacity magazine that had been stolen in Baltimore years ago.

Dispatchers called for an ambulance immediately. Then for a blood bank. The officers were rushed to Harlem Hospital.

When the criminal is white they dont give out the name. Had it been a nigga, the NYPD would have given us his name, social security number, his picture and records of his criminal past. Trump would have Tweeted about it already. But I suspect the cop-killer is white and the white race has to be sanitised as peaceful and law abiding, yet they are the biggest criminals in USA.