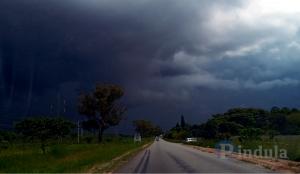 Nyanga has received 121mm of rainfall as the Moderate Tropical Storm Ana tracked over the northeastern parts of Zimbabwe on Tuesday.

In its regular weather update late on Tuesday afternoon, the Meteorological Services Department (MSD) said the tropical storm downgraded to an an Overland Depression after making landfall in Mozambique. The MSD said:

The Moderate Tropical Storm “ANA” made landfall yesterday over the north coast of Mozambique and dumped a lot of moisture in northern Mozambique before evolving into an Overland Depression.

Since then, the Overland Depression has been moving westward; and as of today afternoon, its centre was over the northeastern parts of Zimbabwe, near Cahora-Bassa.

This Overland Depression is moving westward along the Zambezi Valley, causing heavy rain along its path.

However, the extent of its cloud cover and moisture covered much of the country with heavier falls along the Eastern Highland due to orographic rainfall under the influence of a south-easterly airflow.