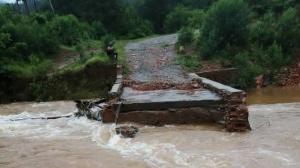 A bridge was swept away while a number of houses collapsed and roads were damaged mainly in Manicaland due to heavy rains caused by the overland Tropical Depression Ana.

Muchira Bridge in Chimanimani’s Ward 22, which connects with Ward 21, was extensively damaged by the rains while Tombo-Magadzire road in Nyanga district is now impassable.

The Civil Protection Unit continues to assess the extent of damage caused by the Overland Tropical Depression Ana.

Basically, we have been affected mostly in Wards 21, 12 and 11. Apart from the four blocks at Nyafaru High School that had their roofs blown off, we also have 14 households that collapsed in the area.

In Nyanga urban, we have five houses that collapsed. We are in touch with those affected through local leadership and we should be able to give the necessary assistance in due course.

He said they established 31 evacuation centres prior to the heavy rains where people will bring their food and stay until necessary repairs are done to their homes.

In Chimanimani, a number of disaster preparedness mechanisms have been put in place including the provision of 86 evacuation centres.

This comes when memories of Cyclone Idai are still fresh in the minds of many who lost relatives, and or properties.

The tropical depression evolved in the Mozambique Channel on Sunday and gradually intensified into a Tropical Storm named Ana.

Tropical Storm Ana hit the Mozambique coast around noon on Monday with a maximum speed of 110 kilometres per hour.

The falling over land turned the tropical storm into an overland depression which gradually lost strength.