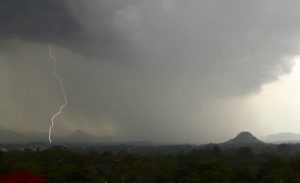 Tropical Cyclone BATSIRAI is now northeast of Mauritius with an area of Tropical Disturbance to the southeast of this (cooler waters). Tropical Cyclone Batsirai has greatly slowed down its movement last night but confirms a South-West movement. It has also weakened a little since yesterday and has since last night been at the minimum stage of a tropical cyclone. At the end of the week, BATSIRAI should approach the eastern coasts of Madagascar, potentially still at a very dangerous stage with the probability of direct impacts on the rise for the central-eastern region of the big island of Madagascar.

WHAT TO EXPECT IN ZIMBABWE?:

Currently, Tropical Cyclone Batsirai and the Tropical Disturbance in the Indian Ocean are not affecting Zimbabwe’s weather this week. However, the cloud system to the west of the country, currently over Botswana is our area of focus. This cloud band is moving eastward and is expected to sweep over Zimbabwe from Thursday evening 03 February 2022 into the weekend. Thus, thunderstorms and rain (above 20mm) is expected in all Matabeleland and Bulawayo Metropolitan provinces from Thursday evening into Friday and spread to the rest of the country from Friday into the weekend. Before this (Tuesday till Thursday afternoon) it should be mostly sunny and warm across Zimbabwe.

Thank you for updates

Thank you for keeping us informed.