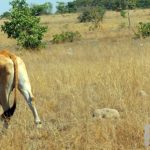 The cattle belonged to a United Kingdom-based farmer, Chido Matewa who was accused of ill-treating the animals by leaving them to starve.

Esther Doloba (48) who holds the rank of Inspector in the ZRP, is jointly charged with Constable Naison Rashamira who is still at large.

Dobola recently appeared before Rusape magistrate, Obedience Matare who remanded her out of custody to 13 December on $7 000 bail.

Prosecuting, Justice Masanganise said in 2016, Matewa was reported to the police for ill-treating her 46 cattle.

Doloba who was the Officer-in-charge at ZRP Nyazura allegedly connived with Rashamira to steal 15 beasts and shared them among themselves.

Masanganise said in a bid to cover up the theft, Doloba and Rashamira applied for a warrant to seize the cattle and take them to Zunidza Farm.

On the face of it, the beasts were to be kept safe under the supervision of the Society for Prevention of Cruelty to Animals (SPCA).

However, the duo did not record the cattle they had taken possession of in the police exhibit book, or in any police books.

On her return from the UK, Matewa was advised of the situation and she went to Nyazura Police Station.

She was charged with contravening Section 3 of the Prevention of Cruelty to Animals Act, Chapter 19.09 where she was alleged to have starved 46 cattle.

Matewa was also accused of causing the death of 15 of the missing cattle.

The police officers refused to accompany her to the farm and show her the carcasses of the 15 cattle they alleged to have died.

Doloba allegedly threatened to jail Matewa if she refused to share her remaining cattle with her.

Rashamira later took Matewa to court where she was tried and acquitted.

At the time, the stolen cattle were valued at $180 000 and nothing was recovered.