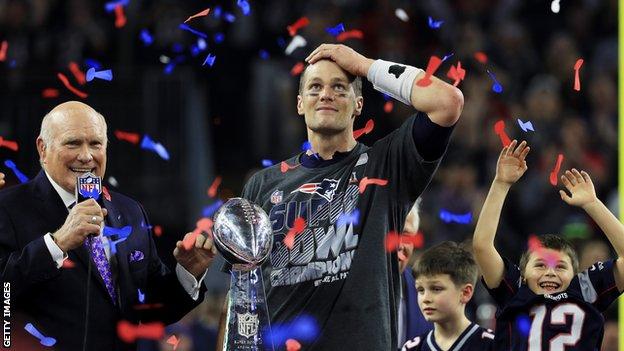 Not all sporting greats are spotted early, not every sporting legend is earmarked at a young age, and that was certainly the case with a certain Tom Brady.

Brady retires aged 44, with seven Super Bowls across three decades and every quarterback record in the book. He's a living legend, the widely proclaimed GOAT (greatest of all time) of not just the NFL but even in the entire sporting world. But it has not come easy.

While a child prodigy like Tiger Woods hit the ground running and was winning the Masters at 21, Brady had to really fight just to get into the NFL - after having to scrap and claw just to get a game for the University of Michigan in his college days, but just like Tiger he would eventually go on to be the name synonymous with his sport.

At a now legendary yet laughable physical display at the NFL Combine - when college players show off their skills in front of NFL scouts - Brady produced a 40-yard sprint barely worthy of the name, moving his awkward and lanky frame at the speed of a glacier.

In the 2000 NFL Draft that followed, when the 32 NFL teams pick the cream of the college crop to bolster their squad, Brady was a sixth-round selection and the 199th overall pick. An afterthought, a punt by the New England Patriots on a possible back-up quarterback.

It was that snub, those comments on every aspect of him by talent scouts, that directly led to Brady becoming who he is today.

They fed the hunger, the desire to win and prove everyone wrong - they placed the biggest chip of all time onto the shoulder of the greatest of all time, a shoulder that would go on to lift the Super Bowl more times on his own than any single team has ever managed in their history.

How did Brady become the best?

Brady has been the best quarterback in history, but he's never been the best paid in the league. He's not a poor man, but the deals he's done with New England over the years have been below market rate, but enabled his long-time coach Bill Belichick to spread the salary cap and keep the team competitive.

After Brady spent a year on the bench, an injury to Patriots quarterback Drew Bledsoe gave him his chance in 2001 and he never looked back. He's always placed winning and the team ahead of even higher financial gain and his own stat sheet, often playing within himself to get the job done.

In a sport built to promote parity, Brady has been a dominant factor, appearing in 10 of the last 20 Super Bowls, and winning the MVP of the big game five times out of his seven wins.

You simply should not be able to do what Brady has done, but by sacrificing some money, his ego, and a large part of his life he's managed to become THE name in the NFL. You may not know your Buffalo Bills from your Baltimore Ravens, you may not know your tight ends from your nose tackles, but everyone knows who Tom Brady is.

Deflategate & 'The Comeback' - a season of all seasons

Brady has many achievements to his name and has seen so much in 22 years in the NFL, but the 2016-17 season must go down as one of the most eventful - and that's above even an almost perfect season in 2008.

In the darkest moment of his career, even darker than missing an entire season through injury, Brady was suspended for four games for his part in the "Deflategate" scandal - when it was alleged the Patriots had let the air out of their footballs in the 2015 AFC Championship victory over the Indianapolis Colts to help with handling in wet conditions.

That win got Brady and the Patriots to the Super Bowl, which they duly won, and although he got his suspension lifted to play the entire 2015-16 season, it was reinstated for the start of 2016 and he missed the first four games of the campaign.

That stain on Brady's character remains to this day among some critics, but if that 2016 season started on a low, it ended on an enormous high as Brady came back with a bang, not only leading the Patriots to yet another Super Bowl but leading the largest comeback in the game's history.

New England defied all the odds by recovering from 28-3 down to beat the Atlanta Falcons in overtime, in a season that defined Brady. Love him or hate him, there's no denying his greatness.

Old Father Time is unbeaten in his battle with sporting stars, but even he would probably take a draw with Brady as the 44-year-old ended his career on top of his game. Brady won four Super Bowls after he turned 37.

He scratched that itch of proving he can do it without coach Belichick, turning regular underachievers Tampa Bay into Super Bowl champions in what was one of his greatest achievements.

And even when they failed to defend their title, Brady led another epic comeback in what turned out to be his final game in the NFL, after ending the season with more passing touchdowns and passing yards than anyone else.

Brady could probably play on a couple more seasons, and still be one of the best around, but that perfectionist in him, that obsessive to detail just will not let him do anything at less than 100 percent.

Brady has gone out on his terms, and he has left the greatest legacy in the sport that we have ever seen, or are likely to see ever again.

The biggest and best comeback in Super Bowl history saw Brady lead the Patriots from 28-3 down to beat the Atlanta Falcons in overtime. It was a relentless assault by New England but you suspect if it was not Tom Brady on the opposite team then the Falcons may have handled it better.

It remains the only Super Bowl to be decided in overtime and, when Brady got the ball everyone, including the Falcons, knew what was going to happen. Brady's crowning moment.

He's since thrown for more yards, but Brady's 4,806 yards in the 2007 season came with a whopping 50 touchdowns as he led the Patriots to the first and still only 16-0 regular season record and his first league MVP.

They fell just one game short of matching the 1972 Miami Dolphins by losing the Super Bowl to the New York Giants and 'that' crazy helmet catch from David Tyree, but it was still a magnificent season.

It was a risk to leave the comfort blanket of New England, and moving to Tampa Bay who had gone 13 years without even making the play-offs raised eyebrows. Yet after a slow start they kicked into gear and became the first team to play in and win a Super Bowl in their own stadium.

Brady also broke his own record for oldest Super Bowl winner and matched Peyton Manning as the only quarterback to win it with two teams.

A decade without a Lombardi Trophy meant inevitable questions about Brady being finished and many thought he would struggle against Seattle's dominant "Legion of Boom" defence in Super Bowl 49.

And yet, trailing by 10 with eight minutes left Brady engineered yet another comeback to win yet again. He also won a third Super Bowl MVP to match his childhood hero Joe Montana.

You always remember your first, and even though Brady's overall stats for the game were low, he was named MVP as he led a late drive of 53 yards in just 81 seconds for the game-winning field goal.

It was a huge win as big underdogs against the high-flying St Louis Rams in 2002, and a brief taste of what was to come from Brady as winning soon became a habit.

You were too old now go home rest....you cant compete with the youngsters now Mahomes e.t.c

Motivational..... great of all time... it's not about talent but character, zeal,dedication n passion