Tobaiwa Mudede In Court For Assaulting His Daughter-in-law 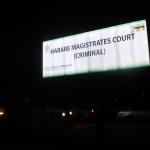 Former Registrar General Tobaiwa Mudede has been hauled before a magistrate on allegations of assaulting his daughter-in-law when she had a quarrel with her husband, Mudede’s son, last month.

Mudede pleaded not guilty to the charges when he appeared before magistrate Dennis Mangosi, who remanded him out of custody to 12 January for trial.

Mudede’s son, Tawanda Mudede, is also separately appearing before the same court on allegations of assaulting his wife, Michelle Masawi.

Allegations are that on 22 November at around 6 pm, Tawanda and his wife visited Mudede at his house in Borrowdale.

Upon arrival, Tawanda called his wife into his room and closed the door from the inside, the court heard.

The wife asked Twanda why he had closed the door and he replied that she was not leaving his father’s place for Chitungwiza.

A misunderstanding arose between the two, whereupon Tawanda assaulted his wife with a broomstick.

It is alleged that Masawi managed to leave the room and ran to their car which was parked outside the gate.

Tawanda reportedly followed his wife and entered into the car where he also allegedly continued assaulting her.

Masawi then called and Mudede rushed to the scene.

But instead of restraining his son, Tobaiwa Mudede allegedly slapped his daughter-in-law in the face.

Masawi reported the matter to the police leading to the duo’s arrest.

IT WAS TABOO AND IT IS STILL TABOO IN THE COMMUNITY I WAS BORN AND BRED FOR A FATHER IN LAW TO TOUCH WHATEVER PART OF A DAUGHTER IN LAW'S BODY.

IF THEY MET ALONG A FOOT PATH, THE DAUGHTER IN LAW WOULD LEAVE THE FOOT PATH FREE FOR THE FATHER IN LAW TO HAVE FREE ACCESS WHILE SHE BENDED HER KNEES TO GREET HER FATHER IN LAW AT A DISTANCE. THIS DOES NOT SURPRISE ME AND OTHERS BECAUSE IT HAPPENED IN NOVEMBER, THE MONTH OF BAD OMEN.

NOW LET US COME TO THE FINER DETAILS OF THIS CASE. THE DAUGHTER IN LAW WILL FIND IT DIFFICULT TO PROVE HER CASE BECAUSE WE ARE NOT TOLD THAT THERE WERE WITNESSES OTHER THAN TAWANDA WHO WILL MOST LIKELY SIDE WITH HIS FATHER.

IF INDEED MR MUDEDE TOUCHED THE BODY OF HIS DAUGHTER IN LAW, HE COMMITTED A HEINOUS SOCIAL OFFENCE. MR MUDEDE IS A VERY SENIOR LAWYER WHO SPENT YEARS DIRECTING OPERATIONS AT THE GENERAL REGISTRAR'S OFFICE.