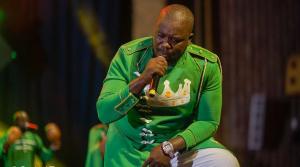 Harare businessman, Tinashe Mutarisi, who is also the founder of Nash Paints and Nash TV, believes gospel artiste Mambo Dhuterere could become one of the finest musicians to ever come out of Zimbabwe.

Posting on his Facebook page, Mutarisi considered it a privilege to have witnessed Dhuterere’s rise from the time he was based in Botswana to now. Said Mutarisi:

Many people started to know Mambo Dhuterere later when he gained fame, but I was lucky enough to have watched the struggle to prosperity from afar.

I received his music from his former manager when he was in Botswana, from there I was used to listening to his music.

Mambo Dhuterere is slowly turning into a living legend, he is talented.

Keep on inspiring us Mambo, you have taught us that life requires one to stand firm and strong and something will eventually give.

Working with Mambo Dheterere is a blessing, he co-operates a lot and he strategises plans.

Mambo Dheterere doesn’t do things haphazardly, he takes time to research and meditate, I can surely say that he is a legend in the making.

Why are you so concerned about me... Let me be. Kana usingafarire my comment please I'd really appreciate it if you'd scroll down or up and just pass by. Im not really interested in your opinion and neither are you in mine.

Mambo Dhuterere all the way.

Reply Report Abuse
Leader of the youths (jnr) 3 months ago