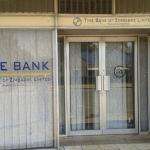 Time Bank Zimbabwe Limited is scheduled to re-open on December 01 this year and has offered to finance white former farmers.

In a statement, the bank said it was in the process of seeking the requisite approvals before rolling out some of the facilities, while underlining that it will not be taking deposits from the public, until further notice.

The bank said it will provide the government with a loan facility from which previous farm owners (PFOs) could be paid their compensation. Read the statement:

Interested PFOs will be required to submit application forms to Time Bank for payment. The maximum payment amount is US$10 000 per PFO, at any given time. Additional amounts will be given in due course. A letter of confirmation from Government is required which confirms that the Government will repay the loan amount to Time Bank.

In July 2020, Government committed to pay US$3,5 billion as compensation to about 4000 former white commercial farmers through the Global Compensation Deed.

Government has, however, struggled to pay the US$3,5 billion, with Treasury indicating in June this year that only $53 million has so far been paid to 737 PFOs.

Time Bank also indicated intentions to arrange loan facilities for exporters and mortgage loan borrowers and for payment of compensation to previous farm owners under the Global Compensation Deed with the government.

The latest development by the indigenously owned financial institution has attracted criticism from some observers who are calling for the compensation of account holders who lost their money when the bank closed in 2004.