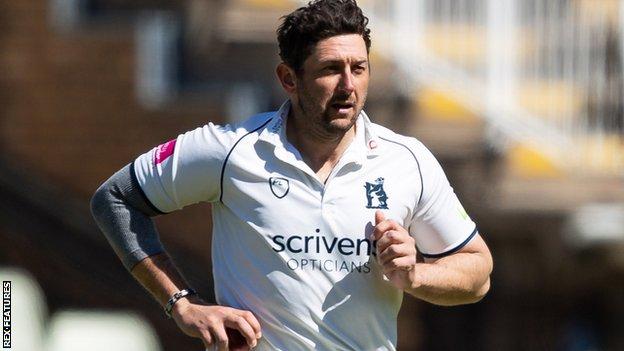 Warwickshire's former England all-rounder Tim Bresnan has announced his retirement at the age of 36.

Bresnan helped the Bears win the County Championship last summer, having previously done so with home county Yorkshire in 2014 and 2015.

"Deep down, I feel I can't reach the high standards that I set myself and my team-mates," Bresnan said.

The right-hand batter and right-arm seamer also played 85 One-Day Internationals and 34 T20 internationals for his country.

"This has been an incredibly tough decision, but after returning to winter training I feel that this is the right time.

The hunger and enthusiasm that I have for the game I love will never leave me, but whilst my head is willing to tackle the 2022 season, my body is not," he said.

"The opportunity to wear the Three Lions is something that should never be taken for granted and I'm proud to have played a very small part in our country's storied history."

Bresnan scored 7,138 first-class runs, including seven centuries, and took 575 wickets at an average of 30.99.

He left Yorkshire in June 2020 and joined Warwickshire later that month on a two-year contract.

But he again became embroiled in events at his former county last November when former team-mate Azeem Rafiq accused him of bullying.

In a statement at the time, Bresnan said: "For any part I played in contributing to Azeem Rafiq's experience of feeling bullied at Yorkshire, I apologise unreservedly.

"I must though categorically deny his accusation that I 'frequently made racist comments'. This is absolutely not true."

He was, however, ordered to attend "cultural awareness and appreciation training" by Warwickshire.

Bears director of cricket Paul Farbrace said though that Bresnan had been a "marvellous servant" to cricket and had had an "astounding career".

He added: "When Tim joined Warwickshire, I believed he could make a huge impact to our side with his experience, knowledge and attitude, and as a county champion, he has certainly achieved that.

"His performances for the club have been exemplary and the impact he made on that final day against Somerset (last season) will be something that no Bear will ever forget.

"Knowing when to retire is an incredibly difficult decision for every professional sports man and woman and I know how much time and thought Tim would have made to reach this conclusion."

Bresnan made his England white-ball debut in 2006, but had to wait another three years before being given his chance in the Test side.

He remained in the squad for the home series in 2013, taking 10 wickets in the three matches he played as England won 3-0, but his Test career ended in disappointment the following winter as Australia romped to a 5-0 whitewash.