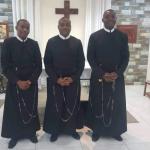 Three Catholic Priests died in a road accident on Christmas Day while the fourth one had to be hospitalised after sustaining life-threatening injuries.

The Church announced that that the trio was buried on Wednesday 29 December 2021.

As a practising Catholic am deeply pained by the loss of these three Brother novices no doubt our faith has been left impoverished by this irreplaceable loss. May their dear souls rest in peace.

The Zimbabwe Republic Police (ZRP) this week released a statement that shows that accidents that happened between 15 and 27 December rose from 1216 last year to 1295 this year.

Police say most of the road traffic accidents occurred on highways as a result of speeding, inattention, misjudgement, following too close, complete disregard of road rules and regulations, and recklessness on the part of drivers.

May their souls rest in eternal peace. Makarwa kurwa kwakanaka🙏

May their souls rest in eternal peace. Makarwa kurwa kwakanaka🙏

May their souls R.I.p

May their souls rest in eternal peace

US$4.00 Harare
Diana chijeni 4 months ago

My their souls in peace

Shame...may their Saul rest in peace

MAY THEIR SOULS REST IN PEACE