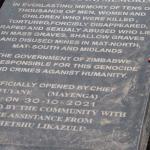 A third memorial plaque to honour the victims of Gukurahundi has been erected at Bhalagwe in Maphisa, Matabeleland South Province, after two plaques that were erected on separate occasions earlier this year were vandalised.

Bhalagwe is the Gukurahundi epicentre where thousands of mostly Ndebele-speaking Zimbabweans were murdered and reportedly thrown into the disused Antelope Mine at the height of the massacres.

Just a short distance from the mine, there is a fenced graveyard where there are two mass graves for Gukurahundi victims.

The site was also a concentration camp for the notorious North Korean trained Fifth Brigade operations in that area.

The latest plaque was erected during a memorial service which was attended by traditional leaders and the Maphisa community led by Ibhetshu LikaZulu.

Addressing the delegation, Chief Khulumani Mathema of Gwanda criticised some chiefs from the region for failing the affected communities and pushing for justice.

The traditional leader said trying to solve Gukurahundi issues through talks has failed hence people should resort to action. He said:

There are issues that need to be addressed for Gukurahundi to be solved. When the National Chiefs Council was first formulated, the intention was to allow free dialogue on the effects of the massacres.

What’s disappointing is that some Chiefs from affected areas are not participating nor are they pushing for these dialogues. They have let people who are not affected take the lead which defeats the whole purpose.

Chief Mathema added that for as long as the perpetrators do not come to the fore and admit wrongdoing, there shall be no resolution of the matter.

Chief Fuyana of Maphisa, expressed gratitude for the persistence of the community who have not given up on replacing the plaques each time they got stolen.

Chief Dakamela, who was also present at the memorial, said the constant vandalism of the plaques is a disruption of the healing process.

Reverend Ndlovu of Brethren in Christ Church highlighted that killing people would never silence them as their spirits will seek justice.

The perpetrators of the massacre should apologize openly,not to hide behind the finger.

Guys this thing ye politics ngatiisiyeyi ukawana mukana idyawo cz Chamisa n ed are business partners as we speak saka its a game kwavari kuti zviite chiremerera.. Makambonzwa here madara iwawo achipindana hard? Its business kwavari isu ngatiitei kuti zvinake kwete kungopopota. Mashona muri wrong same nesu mandebele so chikuru kubatana togadzira constitution iribho.. Look at America those guys don't care which party is ruling cz politicians are guided by the country's constitution. We want a good life where a hard worker is paid something meaningful. As for me i don't support either mdc or zanu i support someone with a good vision.

🧐🤔 my friend rather than blaming everyone, figure out who and what happened. Some of us we weren't born yet, its us being told and blamed of a history we didn't participate in. After all we even feel sorry for the Ndebeles. Stop abusing everyone.

You must read the African History,from the period of Tshaka,and you will know where you come from.Don't be too emotional my dear brother.Let bygones be bygones.

And u took a a dog 😂 😡😡😡😡 I am from Mozambique but stop saying Shona pple let me tell u this Nkomo should have not surrender to the idiot Mugabe my mother is ndebele I am not against any Shona it's the army by then it was comprised of ndebele Zambian malawain pple I tell u some ndebele pple made their names during this time .They are filthy rich now .Phoko where is he now ask him ,,,,,They sold their relatives to get Zanu fevour .Ikozvino mamwe ma chiefs akadya Mari last month paiitwa consultation yenhema me government wani ma ndebele chiefs vakadya vakarasa vebGweru area wani it's pple ,s nature kupfuma nerufu muno munyika Zim my boy read history .Dabengwe was hated by some ndebele when he said I am not a Zanu pf dog .Hakuna mandebele Ari mu Zanu izvozvi ask me Thenjiwe Lisabe akaita cash me Zanu pf wani who doesn't know this .Nkomo let us down Shona ndebele zezuru kalamga Tonga ,Mugabe was sailed into power by whites to protect their farms he was a darling of the west back then ,,Nkomo had his Gwai riiver brigade which was well equipped he had tanks launchers cars everything but he surrendered . Dissidents who were dessidents pple who wanted the truth they were not supported by ndebele pple Gwasela he was killed for the truth he resisted Mugabe .Those are the true heroes .They stood by their beliefs .We need pple like him today now right now my boy not kuruka mamwe marudzi u are an idiot izvozvi sisi vako vakaroorwa nemu Shona mariwakadya yepfuma yemu Shona I support mashoma like Chamisa arikuti this has to stop black history of Zanu pf .nxaaaaaaaaaa wake up join hands with Shona's who want to change things they are millions of good Shona's here in Zim look around.