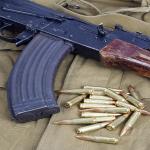 A Masvingo man was recently arrested in Beitbridge after allegedly breaking into two houses where he stole goods among them an AK-47 rifle belonging to a member of the President’s Department.

The 33-year-old Obey Mhuru from Gutu was arrested after he was hit by a car by a man he had threatened to shoot in the Vhembe View suburb on 22 October.

He appeared in court on Friday and his case was postponed to 19 November to allow him to get medical attention at Parirenyatwa Group of Hospitals in Harare.

He has been charged with two counts of unlawful entry.

Ms Fezile Mpofu who was representing the state told the court that Mhuru broke into a cottage in Benne Knot Street on 7 September evening and stole a Samsung J7 smartphone, cash R1 000 and US$70.

On the following day at around, Mhuru went to a house belonging to the President’s Department while the occupants were away and stole an AK-47 rifle (shot butt) and a magazine with 30 rounds.

Both offences were discovered on 9 September and were reported to the police.

Mhuru was arrested early on 22 October at another house in Hill-Clause in the same suburb after being hit by a car as he attempted to attack one of the occupants using the stolen AK47 rifle.

The rifle was subsequently recovered loaded with 19 rounds and the accused opened up to investigators during interrogations that he had stolen the firearm from a house at Benne Knot Street.