"The Zimbabwe We Want Is Coming," Chamisa Tell Supporters In Matabeleland 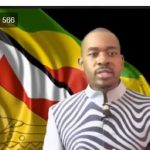 Bulawayo24 reports that the youthful leader was welcomed by joy and ululation as visibly soaked but happy villagers resorted to music and dance. Addressing the gathering, he said:

The Zimbabwe we all want is coming. Let us all remain vigilant and urge each and everyone to go and vote for change.

Chamisa has in recent weeks been touring rural areas to mobilise supporters ahead of the 2023 elections.

He has faced resistance from ruling ZANU PF supporters in some provinces including Masvingo, Manicaland and Mashonaland West where his supporters and or aides were assaulted.

As blockades have been mounted on roads, Chamisa has reportedly abandoned his large entourage and security as they were easy to track and is only accompanied by his aides.

His tours come when Zimbabwe is facing economic and humanitarian and political crises that are characterised by inflation, power cuts and a deteriorating democratic space.

MDC Alliance believes the state of affairs is almost enough for the electorate to vote the governing ZANU PF out of power in 2023.

Meanwhile, ZANU PF is aiming to get at least five million votes to retain power.

ZAPU PF will win 2023 elections resoundingly just like all the previous elections. ED Pfeeeeeeeeeeeeeeeeee, what goal !!

GENERALLY PEOPLE IN MATABELELAND NORTH, SOUTH AND BULAWAYO PROVINCES DO NOT LIKE ZANU PF. THE ATROCITIES DABBED GUKURAHUNDI WHICH WERE COMMITTED BY 5TH BRIGADE ARE STILL FRESH IN THEIR MINDS.

ZANU PF MUST NOT FOOL ITSELF THAT IT WILL GET MEANINGFUL VOTES IN THIS REGION. TAKE FOR EXAMPLE, IN THE LAST HARMONISED ELECTIONS, ZANU PF GOT LESS THAN 8 SEATS IN ALL THE THREE PROVINCES.

IN THIS REGION OF THE COUNTRY, THEY SUPPORT WHICHEVER POLITICAL PARTY WHICH IS STRONG ENOUGH TO BEAT ZANU PF AT THE HARMONISED ELECTIONS. THIS IS WHY THEY SUPPORT MDC ALLIANCE. WHILE THEY SHOULD CAMPAIGN SERIOUSLY IN ALL THE 3 PROVINCES, MDC ALLIANCE MUST EXERT MORE EFFORT IN MATABELELAND NORTH WHERE THEY LOST 5 SEATS IN THE LAST HARMONISED ELECTIONS. THEY LOST ONE SEAT IN MATABELELAND SOUTH PROVINCE AND ONE SEAT IN BULAWAYO PROVINCE.

US$0 Harare
Kwesé 6 months ago

Pfeeeee. Muchasvasvangwa imi. U are riding on a dead horse