"The Stands Are Legal, It's The Tarred Street That Is Illegal" 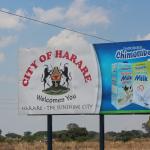 The City of Harare has dismissed reports alleging that it irregularly allocated some residential stands in Glen Norah A on a tarred road in violation of laid-down by-laws.

A report by The Herald claimed the Harare City Council allocated several residential stands on tarred streets in the city, as well as converting recreation areas and wetlands to housing stands.

A house is currently under construction and now at window level in the middle of Mabanda Crescent opposite house number 664 in Glen Norah A.

Two cottages have also been built in the middle of Narira Crescent in Glen Norah A, while a house was built next to house number 1486 close by Narira Street around Glen Norah Flats.

However, in response to the report via their Twitter page, the Harare City Council said the stands are legal.

The local authority said it is the road in question, built 20 years ago, that is an illegal structure. The council said:

People need to get the facts right before going political on purely procedural matters. The stands are very legal.

The road is an illegal structure. No one has been prejudiced. All have access to their properties. Delivering houses to the people.

The road was put there 20 years ago as an illegal structure. The stands are properly surveyed and allocated lawfully.

There is nothing amiss with the stands. They were properly allocated.

The leaks are real but the news is fake