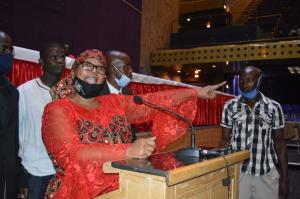 It has now emerged that Khupe is facing seven allegations according to the letter of suspension dated 12 January 2022 addressed to her by Mwonzora. The letter read:

Re: Notice of Suspension Pending

I am of the view that you have breached key provisions of the Real Change Code of Ethics for All Office Bearers of the Party as well as the Disciplinary Code of Conduct and Regulations contained in the Party Constitution. The grounds thereof are that:

1. Sometime in December 2020 you instructed one Patson Murimoga to make a report to the Police to the effect that some ZWL$ 6 million of Party money had been stolen from the Party.

You knew very well that this was false as you were in possession of all information to the contrary.

2. Sometime in April 2021 you instructed your former personal aide Kudzanayi Mashumba to file a false report that his money had been stolen from the President’s office.
Again you knew that this was false as you had
information to the contrary.

3. Sometime in August 2021 you instructed Amos Kaliati to file a High Court application challenging the Extraordinary Congress. You knew that the grounds that he cited were false.

4. You have undermined the National Council by publicly making false allegations against it.

At all times you have been in reasonable possession of correct information but you chose to publish false information.

5. You have from time to time contrary to the Party Constitution appointed “spokespersons” through which you have undermined the party leadership.

6. You have failed to discharge your duties as Deputy President contained in Clause 9.2 of the Constitution of the Party.

7. You have held meetings with some political parties hostile to the MDC-T with the intention to prejudice the MDC-T.

Some of these actions were calculated to bring the name of the Party into disrepute. The investigations into these allegations shall be done by the Arbiter General in terms of Clause 13.2.1 and Clause 13.2.2 of the constitution.

I have directed the Arbiter General to expedite the investigation to minimise possible prejudice to you, the party or any member of the Party.

I expect you to cooperate with the Arbiter General and his team as they carry out their mandate.

During the period of your suspension, you shall not do any party work, attend its functions, participate or initiate any of its activities.

You shall not, during your suspension do any activities including external activities emanating or deriving from your position as the Deputy President of the Party unless with the prior written notice from the President.

Mwonzora at least has the mandate of Congress and support of the NEC. Khupe was appointed by Mwonzora after the December 2020 Congress held at the Rainbow Towers, formerly Sheraton hotel. Since then she has been undermining Mwonzora out of spite and bitterness. Apart from Phugeni who else is standing by her side? Running away from a hearing implies guilt on a her part. She should have submitted to the hearing and challenged the charges, procedure & composition of the committe etc etc.