Tendai Ndoro Kicked Out Of His Kyalami Estates Home By Wife 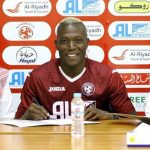 Former Chicken Inn striker Tendai Ndoro was reportedly kicked out of his affluent home in Kyalami Estates in Johannesburg, South Africa, by his South African wife.

B-Metro reported sources as saying Ndoro had a fallout with his South African wife, Thando Maseko, who kicked him out of their home and took possession of their cars. Said a source:

It appears Ndoro’s property in South Africa is not registered in his name so when things were not going well with his wife, he was kicked out of their Kyalami Estate home.

The biggest mistake he made was not registering the house and cars in his name and that will be his downfall.

Ndoro’s family in Bulawayo are distraught about the situation because it can’t be easy to watch their son lose everything he worked hard for in South Africa and Saudi Arabia to his estranged wife.

At one point Ndoro clashed with his wife which resulted in his arrest and having to spend several days in jail over domestic violence allegations.

The former Orlando Pirates striker allegedly choked Maseko and threw a TV at her during a fight that apparently stemmed from a fake marriage certificate.

The fake certificate reportedly states that Ndoro and Maseko were married on 20 September 2017, when in fact, their wedding was in December 2017.

Last week Ndoro denied reports that he was broke. This was after pictures of the frail-looking player who was in Shamva surfaced on social media. He said:

I don’t want to speak to the media. I’m in Bulawayo. I came back from South Africa to visit my mother.

I’m actually in Bulawayo and I will be going back to South Africa soon. My family is in South Africa and why should I stay long in Zimbabwe.

Reports suggest that Ndoro is broke and that he was recently given a cash injection by his close football associates Marvelous Nakamba and Kudakwshe Mahachi, among others.

Are all woman like this guys this is a lesson

Don't marry this South African girlfriend of yours

S.A women are like that.. they will kill you n take your belongings even if you didn't fight with them

Stop lying. Just because one South african woman did that you are now blaming all south African women. Even Zimbabwean women do that.
He chose this for himself. Stop blaming other people fir his actions ciz you dont know all the story.

Report Abuse
Do that 9 months ago

Ndoro dumbed his Zim fiance for this south african girl in a very painful way.I still remember the touching news back then.Now the tables have turned .

Yes. They say you reap what you sow.
People should stop blaming the south African wife.

l hope he gets his house and car,don't ask me how

Report Abuse
The Rock 9 months ago

They are not after man they want men who are not lazy who will be able to take care of them. Would you allow your daughter to marry a lazy man with no future?

Women can't be trusted. When you've got the money you become a golddigger magnet. Never register your property in your wife's name or jointly in both your names. A prenuptial agreement is of paramount importance.

You flaunt money in front of them and then you call them golddiggers??

MOST COMMENTETERS, IF NOT ALL HAVE GIVE SOCIAL ADVICE TO TENDAI NDORO. I WILL TRY TO GIVE LEGAL ADVICE TO CAMARADA NDORO.

BUT TO DO THAT NDORO SHOULD OPEN UP AND TELL US WHY HE REGISTERED HIS MOVABLE AND IMMOVABLE PROPERTIES IN HIS WIFE'S NAME INSTEAD OF IN HIS NAME.

WHEN TWO PEOPLE ENTER INTO A MARRIAGE, NORMALLY THAT MARRIAGE IS MARRIAGE IN COMMON. THAT IS TO SAY WHATEVER THEY ACCRUE FROM NOW ONWARDS IT IS THEIRS TOGETHER. THEY WILL KEEP A RECORD OF THE PROPERTY EACH ONE BROUGHT INTO THE MARRIAGE.

CAMARADA NDORO, I HAVE JUST GIVEN YOU BUSHY LEGAL ADVICE. GET A REAL LAWYER SO THAT YOU SALVAGE SOMETHING FROM THIS MESS. IN THE MEANTIME, GET READY YOUR PAY SLIPS AND BANK ACCOUNTS OR STATEMENTS. THESE WILL PROVE THAT YOU CONTRIBUTED MEANINGFULLY IN THE SUSTENANCE OF THE FAMILY.

[ ROORANEI VEMATONGO ] LITERALLY MEANING MARRY THOSE YOU KNOW VERY WELL. MARRIAGE IS AN EVERLASTING SOCIAL CONTRACT WHERE BOTH PARTIES EXCHANGE VOWS TO LIVE TOGETHER TILL DEATH DO TAKE THEM APART.