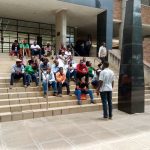 The Amalgamated Rural Teachers Union of Zimbabwe (ARTUZ) has welcomed indications by Finance Secretary George Guvamatanga that civil servants’ bonuses for this year will be paid in foreign currency.

Guvamatanga revealed that civil servants will be paid their bonuses in foreign currency up to a maximum of US$700 and civil service pensioners will receive bonus payments of US$100 plus an extra US$80 for spouses.

In a statement this Friday, ARTUZ said the development will temporarily alleviate workers from the dire situation they are in.

However, the union has expressed displeasure with the fact that the Government has not undertaken to base the bonuses on the civil servants’ pre-October 2018 salaries. The statement read:

The Amalgamated Rural Teachers Union of Zimbabwe (ARTUZ) takes note of the recent memo on the 3rd of November 2021 by finance secretary Mr Guvamatanga to the Public Service Commission in which indications were made that the 2021 bonus will be paid in United States Dollars, USD.

Whilst this is a welcome move as it temporarily alleviates workers from the dire situation they are in, we are appalled that the bonuses are not capped at the original value of our salaries of pre-October 2018.

ARTUZ also demanded that the bonuses should be paid in cash and vowed to resist if the Government decide to pay the bonuses in RTGS dollars converted at the interbank rate. Added the union:

We also are strongly urging the government that any attempts to pay the bonuses at the interbank rate will be resisted and the payment should be in USD across the board.

The payment of bonuses in USD vindicates the Union’s long-held position that the government of Zimbabwe has the capacity to pay its workers in USD but only lacks commitment.

Meanwhile, ARTUZ has taken a swipe at the Zimbabwe Teachers Union (ZIMTA), without identifying their rival by name, for celebrating the development and claiming that the Government has responded to their lobbying.

ARTUZ accused ZIMTA of collaborating with the Government and receiving information prior to their statement on 8 November.

On 8 November, ZIMTA issued a statement demanding that the Government pay teachers their 13th cheque in United States dollars saying “teachers are sinking deeper into incapacitation each and every day, this is the only way to avert crushing them deeper into poverty and dysfunction.”

If the money goes to Notro accounts is it not as good as us cash when buying anything?

Nothing wrong with demanding a living wage, you have a right to also demand what you think you deserve Gaffer whether uri kutsvira kuma offices emaShefu or whatever you are doing. So stop blaming educated proffesionals for demanding what they deserve.