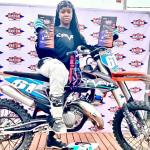 The 17-year-old rising star, who is the European Union-Zimbabwe Honorary Ambassador for Youth, Sports and Gender, is well known for her exploits on the motocross racing track and her efforts to empower children from underprivileged communities in the country.

Muzinda (17) who is now based in Florida, United States has been named alongside other influential women from all over the globe. BBC said:

Taking on the male-dominated world of motocross, or off-road motorcycle racing, Tanya Muzinda has become her country’s off-road circuits champion. She is the first Zimbabwean woman to win a motocross championship since the competition started in 1957.

Inspired by her father, Tawanda, a former biker, she started training when she was five. Now 17, Muzinda hopes to be the first black African to win a women’s motocross world championship. In 2018, she was crowned Junior Sportswoman of the Year by the African Union. With her motocross earnings, she engages in charitable work, paying tuition fees for around 100 students to attend school in Harare.

Claire Williams, the editor of 100 Women, said for the first time, they were dedicating half of this year’s 100 Women list to women from one country — Afghanistan.

Williams said they wanted to recognise the bravery and the strength of Afghan women as they reset their lives.

Muzinda could not hide her excitement after her recent recognition by the BBC. Tanya wrote on her Facebook wall yesterday:

It’s an honor to be named amongst great and powerful women in the whole wide world as BBC 100 Women’s most inspiring and influential.

It gives me hope and (it’s) a great sign to my fellow country little girls that despite all our setbacks and limitations on our paths we will rise!!

Well done to the other honoree Women.

Muzinda is the first female winner of a race heat in Great Britain when she competed in the 2017 British Masters Kids National Motocross Championships in Motoland Mildenhall track.

Taya and her family relocated to Florida, United States, towards the end of 2019 in her bid to race consistently with world-acclaimed riders.

Her move to the United States was orchestrated by her international manager, Stefy Bau of Italy, who is a former three-time World Women’s Motocross Champion.

You raise our Zim Flag Tanya.

You raised our zim flag Tanya

Report Abuse
Leader of the youths (jnr) 5 months ago