Taliban Bans The Use Of Foreign Currency In Afghanistan 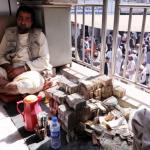 Afghanistan’s new rulers, the Taliban on Tuesday announced a complete ban on the use of foreign currency in the country.

According to analysts, the move is certain to cause further disruption to an economy pushed to the brink of collapse by the abrupt withdrawal of international support in the wake of the group’s takeover of the country in August.

The surprise announcement came hours after a coordinated gun and bomb attack on Afghanistan’s biggest military hospital in the capital, Kabul, killed at least 19 people and wounded dozens more.

The Islamic Emirate instructs all citizens, shopkeepers, traders, businessmen and the general public to … conduct all transactions in Afghanis and strictly refrain from using foreign currency.

Anyone violating this order will face legal action.

The use of US dollars is widespread in Afghanistan’s markets, while border areas use the currency of neighbouring countries such as Pakistan for trade.

The Taliban’s government is pushing for the release of billions of dollars of central bank reserves as the impoverished nation faces a cash crunch, mass starvation and a new migration crisis.

Afghanistan’s previous Western-backed government had parked billions of dollars in assets overseas with the United States Federal Reserve and other central banks in Europe.

But after the Taliban took over the country in August, the US, as well as the World Bank and the International Monetary Fund (IMF), decided to block Afghanistan’s access to more than US$9.5 billion in assets and loans.