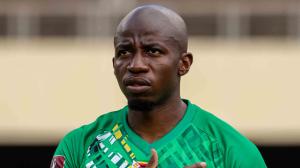 Versatile Warriors player, Gerald Takwara, said it has been his dream to be named man-of-the-match in an important match.

Takwara was speaking after he won the accolade in Zimbabwe’s 2-1 win over Guinea in an Africa Cup of Nations (AFCON) Group B match in Yaounde, on Tuesday night. He said:

It feels great to be named man-of-the-match in a game full of stars like that. I am so grateful for the award.

It’s something that makes me feel great because I have always wanted and dreamt of having that accolade in my career.

It’s the best tournament in Africa and facing some of the best players in the world, that’s the best experience a player can wish for.

My confidence is now so high and this has been a platform for me to improve and I can believe that I can do anything.

The Venda Football Academy defender was one of the key men for coach Norman Mapeza in their AFCON campaign.

The former Ngezi Platinum Stars captain featured in all three matches, playing in central defence alongside Teenage Hadebe in the first two matches (against Senegal and Malawi), and in a much-changed rearguard against Guinea.

Ehe sha chi team chaanotambira ndeche manga manga but anogona wena. He's a rock we can build our team on. 👏👏👏