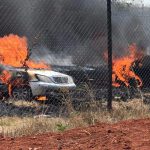 A suspected mental patient went berserk and allegedly stoned four cars at an overnight car park in Bulawayo’s Mpopoma suburb before torching two of them, reducing them to shells.

The incident occurred in the early morning hours of Tuesday at a car park situated at the intersection of Nketa Drive and Hyde Park in Mpopoma.

The Toyota Hilux belongs to a non-governmental organisation (NGO) while the Mazda BT 50 is owned by an individual.

The owner of the Mazda BT50 who declined to be named was at the scene when the Chronicle crew arrived. He refused to comment. He said:

I can’t talk to you right now as you can see that I am not emotionally sound. Talk to the owner of the car park.

Sources said firefighters from the Bulawayo Fire and Ambulance Services department were called to the scene and quelled the fire, which had already extensively damaged the two cars.

The owner of the car park, Mr Sibangani Malunga said the incident occurred between 1 AM and 2 PM. He said:

The incident occurred between 1 AM and 2 AM and it appears a mentally ill man strayed into my premises while my two security guards were fast asleep. He damaged four cars before burning two other cars, one of which belongs to an NGO.

This is my only source of living and, therefore, with this unfortunate incident, some of my loyal clients are likely to ditch me. This has cost the owners of the cars a fortune and it is clear that this has affected them emotionally.

Police are now handling the matter, but on my side, I will also find ways of getting to the bottom of this mater.

Bulawayo provincial police spokesperson Inspector Abednico Ncube said investigations were underway adding that no arrests have been made.