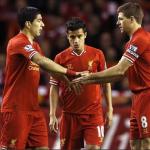 Spanish football reporter Gerard Romero has on his Twitch channel said Luis Suarez is rejecting some offers as he is focused on reuniting with Steven Gerrard at Aston Villa.

Romero tweeted that the Atletico Madrid star has ruled out three offers from Brazilian sides Palmeiras, Corinthians and Atletico Mineiro.

Suarez has also said no to a Saudi Arabian side because he is instead keen on joining Villa.

Gerrard and Suarez had a great relationship when they played together at Liverpool.

However, it’s likely that any deal will have to wait until the summer with Suarez’s Atletico Madrid contract set to come to an end.

Gerrard has often made his feelings clear on Suarez and stated in 2015 he was the best player he ever played with. He said:

I don’t think anyone ever looks forward to playing against Luis Suarez, he is a fantastic talent and a very dangerous player.

He is a fantastic teammate, probably the best player I have played with.

Gerrard has already brought one of his former Liverpool teammates to Villa.

Philippe Coutinho joined the blue and clarets army from Barcelona on loan for the remainder of the season.

Coutinho made an immediate impact, scoring off the bench on his debut to seal a 2-2 draw at home to Manchester United on Saturday.

How did Chelsea play nezuro?