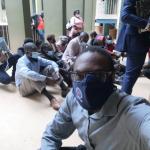 15 of the 16 Amalgamated Rural Teachers Union of Zimbabwe (ARTUZ) members who were arrested on 12 January during a protest over poor salaries in Harare have been granted $5 000 bail each.

One of the protestors was granted free bail.

The accused appeared before Harare Magistrate Yeukai Dzuda charged with participating in a gathering with the intention to promote public violence, bigotry and breaches of peace as defined in Section 37(1)(a) of the Criminal Law (Codification and Reform) Act.

In granting them bail, Dzuda considered the fact that the accused were not a threat to public security because no one was injured during the protest, and no weapons were found on the suspects.

The court also considered evidence by the investigation officer that there was no harm in granting them bail, and the accused could easily be traced through the Ministry of Primary and Secondary Education.

The State had argued that if the accused were granted bail, they would flee the country for greener pastures.

Prosecutors also said their behaviour is consistent with that of people who are no longer interested in their jobs.

The teachers will be back in court on 17 February.

Is this platform not a spyware,somebody help.

🤔🤔 Where,were you where we where were?

Ini will never vote for him

A FEW WEEKS BACK I APPLAUDED THE COURTS FOR SEEMINGLY TO OPERATE INDEPENDENTLY. THE BAIL OF RTGS 5000 IS AFFORDABLE UNLIKE IN THE OLD DAYS WHERE THEY COULD HAVE BEEN GIVEN BAIL IN THE REGION OF RTGS 10000.

I WANT TO THANK PTUZ FOR STANDING IN UNISON WITH THE 16 MEMBERS OF ARTUZ.

SHAME ON YOU OTHER TEACHERS UNIONS FOR NOT STANDING IN SOLIDARITY WITH ARTUZ MEMBERS.

Report Abuse
The Terraces 4 months ago

So you admit there are greener pastures out there and no one is interested in his job. At least we live in the same world - Thats a start.

So the State is comically admitting or acknowledging that the issue is all about PASTURES under than threat to peace kikiki e pastures are no longer green...the teachers can't withstand them anymore...
The State should simply water e pastures...e children are simply asking for bread,why throw to them stones???

" The State had argued that if the accused were granted bail, they would flee the country for greener pastures."

So in other words the state is for a fact accepting that they are underpaying these teachers. Kwanzi greener pastures kwete kuti vari wrong but they fear kuti they may go and look for better life outside this country 🤣🤣🤣. Asi ma lawyers anotorova sarcasm handiti