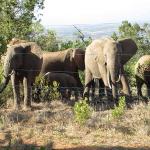 Residents at Lupane Centre are living in fear after stray elephants, one of them with a calf, were spotted in the area on Tuesday.

According to authorities in Lupane District, the presence of elephants is not new in Lupane as the area is adjacent to the Hwange National Park with vast conservancies around, but, the visit by the jumbos this time of the year is not common.

Rangers from Kusile Rural District Council (KRDC)’s Communal Areas Management Programme for Indigenous Resources (Campfire) quickly mobilised and hunted down the elephants following reports that a herd of three including a calf had been spotted along the Victoria Falls highway near Mabhikwa High School while another with a calf had been spotted in Ndengwende village near Lupane Police Camp.

The ones that were spotted near Mabhikwa High School at the layby reportedly moved past the Grain Marketing Board Lupane depot and residential areas.

People in Lupane have co-existed with elephants for a long time. There are indigenous forests that are habitat to elephants so they always come out. The only issue now is when they come closer to the community and the frequency which is getting higher. Usually, they come during the cropping season.