Steward Bank Records A 158% Surge In Profit After Tax 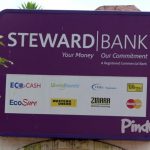 Zimbabwe’s largest bank by depositors, Steward Bank recorded a 158% surge in profit after tax to ZWL255 million during the half-year ended 31 August 2021 from ZWL211 million recorded during the same period in 2020.

Net interest income for the period rose by 243% to ZWL706 million from ZWL206 million in the prior year.

Non-interest income rose by 54% to ZWL2 billion up from ZWL1.3 billion achieved during the 2020’s corresponding period.

Resultantly, net operating income was up by 29% to ZWL2 billion from ZWL1.6 billion during the period.

Income tax expenses plunged by 82% to ZWL19 million during the review period from ZWL108 million in 2020 while deposits plummeted by 71% to ZW18 billion from ZWL10 billion in 2020. The Bank said in a statement accompanying the financials:

The Bank has dispensed more than 55,000 digital loans to women in the half year under review and maintained a POS device complement slightly above 3, 000 in the rural areas, ensuring that sole traders and merchants operating in these areas have access to financial services.

As a result, loans and advances to customers soared by 151% to ZWL4 billion from ZWL1 billion recorded during the same period last year.

Total assets grew to ZWL25 billion, a 56% increase from the ZWL16 billion asset position achieved last year during the same half.

The Bank zero-rated its Square Mobile Application to allow customers to transact without data thereby ensuring that customers have access to financial services at all times.

The Bank added that it will focus on three pillars Digital, Disruption and Delivery during in the second half of the financial year.

Mungatadze sei kuita mari,muchibira madepositors.The previous month my salary reflected after six days from the payday It was activated in the night,I wonder.