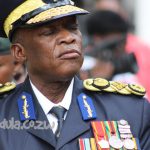 The High Court is this week expected to hear a corruption case in which the State is seeking to recover more than US$32 million and seize numerous properties from former Police Commissioner-General Augustine Chihuri and his family.

Chihuri, who has been in exile since the military coup that toppled the late former president Robert Mugabe in 2017, reportedly siphoned millions of dollars for his personal, family and cronies’ benefit during the 25 years he was police boss.

The five properties were registered in the names of Chihuri’s family members and the State is still trying to figure out how ownership changed in respect of two other assets previously owned by the Chihuri family.

Prosecutor-General Kumbirai Hodzi has filed a fresh application seeking an explanation on the sale of the properties. The properties sold include:

The Chihuri family is also expected to explain how they acquired Lot 3 of Plot 4 of Juliasdale, Nyanga, a property worth US$3 860 000, and 14453 Ibhalabhala Crescent, Selbourne Park in Bulawayo.

Augustine has remained mum for a reason, trust me he doesnt care much now

I FEEL VERY SORRY FOR THIS CAMARADA KNOWN AS AUGUSTINE CHIHURI. WE WENT TO THE SAME SECONDARY SCHOOL, ST ALBERTS, IN MOUNT DARWIN IN 1970. I WAS DOING FORM 1 WHEN AUGUSTINE WAS DOING FORM 2.

HE WAS EXTREMELY BRIGHT AND LOYAL TO THE ROMAN CATHOLIC JESUITS FATHERS. AUGUSTINE WENT TO WAR IN 1972 SOON AFTER COMPLETING HIS O LEVELS IN DECEMBER 1972. HE COMES FROM MADZIWA AREA.

I DO NOT KNOW WHY HE GOT SO GREEDY TO ALMOST SINGLE HANDEDLY OWN THE WHOLE OF GLETWIN SUBURB.

THE ONLY SOLUTION IS TO ASK CAMARADA CHIHURI HOW HE ACQUIRED THESE PROPERTIES AND IF HE CAN NOT EXPLAIN, THEY SHOULD BE FORFEITED TO THE STATE.

I AM AWARE THAT CAMARADA CHIHURI IS SITTING PRETTY WITH HIS PARENTS IN LAW IN MALAWI. I DO NOT THINK HE WILL BE WILLING TO COME BACK TO DEFEND "HIS" PROPERTIES.

HE HAS PROVED THAT HE WAS NOT A POLITICIAN. WHILE HIS COLLEAGUES IN SOUTH AFRICA AND KENYA COMMENT ON POLITICAL ISSUES, AUGUSTINE HAS REMAINED MUM.

My questions are, how much have you amased so far as the presidium? How much did you have before entering the government? How many properties do you have so far? I know of this other property on a hill with nice architectural touch belonging to the VP 🤔. Mines belonging to HE's proxies 🤔. Zmukadyiwa in elections ibvai matiza henyu nekuti those millions will be recovered too 🤣🤣🤣🤣🤣🤣

After Chihure's blunder...they wanna take in pretence that they recovering it on behalf of the state whilst they share it amongst themselves....a case of powerful thief, forcefully taking e loot from a weaker thief in pretence of returning it to e owner..

As long as pple like Henrietta Rushwaya who were caught red-handed are walking scott free then all this noise is just the barking of a toothless bulldog.

Those who are currently serving what do they have.why do they follow the property when someone is out of power