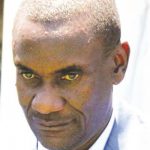 President Emmerson Mnangagwa fired his close lieutenant Owen Mudha Ncube from his position as State Security Minister allegedly for defying his orders to refrain from jostling for a ZANU PF leadership position in the Midlands province.

NewZimbabwe.com was told that Mnangagwa had become frustrated by Mudha’s ‘violent tendencies’ and crossing paths with his wife, Auxilia.

Ncube was fired Monday afternoon, with chief secretary to the President and Cabinet Mischeck Sibanda simply stating in a press statement he had displayed “conduct inappropriate for a minister of government”.

According to sources, Mudha was meeting Central Intelligence Organisation (CIO) directors when he was handed a letter terminating his employment.

NewZimbabwe.com reports that Ncube was fired after his decision to impose himself as ZANU PF Midlands provincial chairman triggered violent scenes which resulted in Saturday’s Provincial Coordinating Committee (PCC) meeting being aborted.

The violence erupted after some senior officials vehemently opposed his decision.

In addition to imposing himself as vice chairman, which he allegedly did, Mudha also reportedly tried to smuggle his friends into the provincial executive.

NewZimbabwe.com reported last year October that Mnangagwa had threatened to fire Ncube as a minister following his involvement in factional battles which ravaged the province.

He opted to keep the ministerial job and pulled out of the race, only to turn around last Saturday and claim he was now the vice-chairman of the province.

Another source said Mnangagwa had been aiming to fire Mudha for some time because of his violent tendencies, defiance, and also because of the bad blood between him and first lady Auxilia Mnangagwa.

Mudha who is alleged to be the leader of a vigilante group in Midlands, Alshabaab, reportedly brought at least two commuter omnibuses with party youths wielding machetes to last weekend’s ZANU PF meeting to fill the provincial executive.

Sources say some party members immediately left the event before the programme ended as they feared for their safety and the meeting was aborted without the provincial executive being fully constituted.

Ncube becomes the fifth minister to be fired by Mnangagwa since 2018. The others are Prisca Mupfumira, Energy Mutodi, Fortune Chasi and Obadiah Moyo.

Nope it's Mudha not Mushurugwi

He will bounce back...he is a ferocious bull

Ask me Owen ibhuru mu Midlands where I am. He is a gold Baron.