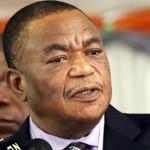 State security agents on duty at a government function in Chikomba, are reported to be in hot water after a DJ unintentionally played an MDC song from his music collection in the presence of Vice President Constantino Chiwenga.

Chiwenga, who also doubles as the Health Minister, was the guest-of-honour at the event where he officially opened a rural clinic in Chikomba West.

Hundreds of villagers who were gathered took to the dance floor as former MDC Glen View South MP Paul Madzore’s song, “Handicheuke” blared from the speakers.

The incident, which was confirmed by the Children of Zimbabwe War Veterans Association (COZWVA), embarrassed ZANU PF officials present. COZWA wrote on Twitter:

Drama as music DJ mistakenly plays an MDC Alliance song by Paul Madzore at a ZANU PF rally, which was being officiated by VP Chiwenga in Chivhu.

And the whole crowd burst with joy dancing to the tune humiliating the officials.

NewZimbabwe.com reported Government sources on Tuesday as saying state security agents present at the event were being interrogated by their superiors over why the incident had transpired.

A senior military officer is reported to have demanded an investigation into the “mishap”. He was heard fuming:

How could that be allowed to happen? I want the names of all those members of the security forces who were present now.

They need to be investigated, especially the Director Military Intelligence (DMI) who was responsible for inspection.

Akapenga Dj he is the best Dj forever

Good morning to you all

DJ has nooo problem here.
Let's stop commandeering people to our gatherings, rallies etc those people who danced to the song were not our supporters.

However, I'm not happy with your General, seems you're now working with 'mhandu'.

US$200.00 Harare
Brigadier General 6 months ago

Yes, its one of the best songs. What a song.

The youngman is quite a very good composer, hopefully he will penny one for the ruling party.

Im so sorry Zanu pf supporters , i was called on a last minute so i coudn't arrange my house in order.

General vakushanda ne MDC kas hamuzvizivi. Dj uyu aitoziva zvaaiita it was an instruction. Who could make such a mistake especially uri a professional dj. Each occasion has it's playlist.

Kkkkkkkkk this is one of the most funniest article i ever read in Zimbabwe, i guess the General laughs a lot about that issue when he is alone.

Ohhh,people are just dancing according to the leaders tunes.Pliz dont harm the innocent sheep.

Why should he be beaten? Wouldn't that be violating one of his basic human rights?
NO TO TORTURE! NO TO VIOLENCE!