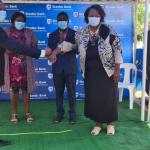 This article was sponsored by Stanbic Bank

A leading financial services institution, Stanbic Bank, has donated a Haemodialysis machine to Gwanda Provincial Hospital to alleviate challenges faced by kidney patients at the health institution and its environs.

The donation by Stanbic Bank comes after Gwanda Provincial Hospital authorities indicated the dire need for a Haemodialysis machine for patients most of whom were at risk of losing lives without such a machine to help support the function of their kidneys.

Speaking during the handover event, Stanbic Bank Head, Brand and Marketing, Palmer Mugavha, said the financial services institution was committed to playing its part in meeting the healthcare needs of the communities in which it operates through its Corporate Social Investment (CSI) initiatives linked to its pillar of Health and Sanitation.

“Our health-related CSI initiatives fall under the name USIZO-RUYAMURO, which seeks to play a pivotal role in supporting our country to address pressing public health needs of its people. In light of this we established our flagship USIZO-RUYAMURO, where we bring on board like-minded corporates, organisations and other institutions for us to put our hands on deck and assist in health service delivery through the provision of machines, drugs and facilities needed to alleviate prevailing health challenges,” said Mugavha.

He said as part of that vision, Stanbic Bank approaches major/district hospitals and requests them to share their critical needs.

“We understand installation and testing took place last week and hence am proud to be representing Stanbic bank to officially hand over a critical piece of equipment in addressing kidney failure challenges.”

He said that the kidney is a critical organ in the body as it removes waste products and drugs from the body, balances the body’s fluids as well as releases hormones that regulate blood pressure.

When one’s kidneys are damaged, waste products and fluids can build in one’s body causing swelling in ankles, nausea, weakness, poor sleep and shortness of breath. If such a situation continues untreated it can escalate and subsequently lead to total kidney failure and eventually death.

“Given this background, we did not hesitate to play our part in not only reducing the suffering but also saving lives of kidney patients through the purchase of the Haemodialysis machine,” said Mugavha.

He said Stanbic Bank was planning on rolling out similar initiatives to more district hospitals in 2022 and beyond.

As part of USIZO-RUYAMURO, Stanbic Bank, in April this year, purchased equipment to resuscitate operations for Sally Mugabe Maternity Hospital theatre number 1 at the maternity wing in Harare.

It went on to refurbish its recovery room as well as the nurses working areas. Last year, we also purchased Personal Protective Equipment (PPE) and other vital machines worth US$200 000 as we contributed to the fight against the menacing COVID 19 pandemic.

The Standard Bank Group subsidiary’s CSI initiatives are not only aligned to health but cover areas such as education, the environment among others.

In a speech read on his behalf, Minister of State for Provincial Affairs and Devolution, Hon Abednico Ncube commended Stanbic Bank for its “astounding gesture on services support and CSI”.

Hon Ncube said the donation was timely as it contributed to the Hospital’s quest to improve service delivery in line with the National Health Strategy to control non-communicable diseases (NCDs).

“The Gwanda Provincial Hospital renal Unit currently serves clients from Insiza district to as far as Beitbridge, meaning Stanbic Bank has donated to the people of Matabeleland South. Dialysis serves to prolong life when the kidneys have failed due to diseases such as hypertension, diabetes mellitus, HIV, malaria and others,” said Hon Ncube.

He commended Stanbic Bank and other like-minded institutions and organisations for supporting the institution and challenged more to come on board.

Gwanda Provincial Hospital is the curative hub in the capital of Matebeleland South providing responsive general medical and emergency health care to the province’s citizens and passers-by.

“There is a great need for the community and the corporates to appreciate how the hospital functions…For those still looking into how to partner and assist the hospital, there is still need to have a proper casualty or accident and emergency care infrastructure,” he said.

What STANBIC has done should be commended.I wish you all the prosperity in your business.

We appreciate that generous gesture by this financial institution, we edge all other cooperate institutions to come on board to help all other health institutions. As i speak right now in manicaland we have only one dialises machine at mutare provincial hospital,and it can't contain the load of patients from all surrounding small district health institutions.Most patients will be referred to private hospitals which will charge between 80 to 100 u.s dollars per session. Fathemore we apeal to the parent ministry to prioritize these machines in rural areas to help these less previlleged rural communities and to reduce workload in urban referral health institutions.

Well done,keep it up Stanbic Bank

Really apreciate the great work. God bles the brains behind this donation. The Hospital authorities shld ensure that the machine is not abused.