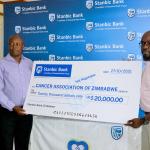 This article was sponsored by Stanbic Bank

Stanbic Bank has donated $USD20 000 to the Cancer Association of Zimbabwe (CAZ) for the purchase of chemotherapy drugs as part of its annual contribution to the fight against cancer in Zimbabwe.

The drugs are meant for the less privileged cancer patients who fall under the ambit of the Cancer Association of Zimbabwe (CAZ).

Speaking during the handover ceremony, Stanbic Bank non-executive board member Simbarashe Mhuriro said the financial services institution was aware that cancer is now a public health concern hence its commitment to fight against the disease.

“Today’s donation marks eight years since Stanbic Bank started this relationship with CAZ in which the leading financial services institution puts its shoulder to the wheel in the fight against cancer. We cherish our relationship with CAZ, which is being cemented each year on the realisation that cancer is fast emerging as a major public health concern in Zimbabwe,” said Mhuriro.

He said the donation was part of Stanbic’s flagship Corporate Social Investment (CSI) health-related initiative which seeks to help, support and facilitate the growth and sustainable development of public health services in Zimbabwe called USIZO- RUYAMURO.

The initiative kicked off in 2019 when Stanbic facilitated the reopening of Tariro Hostel – a halfway house for cancer patients run by CAZ.

Tariro Hostel provides rent-free accommodation for cancer patients who do not stay in Harare when they come for their chemotherapy and radiotherapy treatments at Parirenyatwa Hospital and Harare Central Hospital.

The Hostel had been lying idle since 2007 and Stanbic Bank refurbished it in 2019 in addition to purchasing bed linen and other utilities.

Mhuriro also said the donation by Stanbic Bank is part of its commitment to plough back into the community in which it operates through well thought out CSI initiatives in the areas of need such as health, education, and the environment.

“The organisation is forever indebted to Stanbic Bank for the support it renders to CAZ on behalf of Cancer patients in Zimbabwe. We doubly appreciate this donation,” he said.