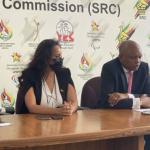 The Sports and Recreation Commission (SRC) says there is no going back on their decision to suspend the Zimbabwe Football Association (ZIFA) Board, contrary to some unverified reports.

The SRC suspended the Felton Kamambo-led ZIFA Board on Tuesday citing gross incompetence and corruption.

In a statement on Wednesday evening, the SRC said they are determined to clean the rot in local football and will not reverse the move to suspend the ZIFA board. SRC said:

SRC notes the misinformation circulating concerning a possible reversible of the ZIFA Board suspension, this is not factual.

SRC is resolute in implementing its mandate to address areas that have crippled football development in Zimbabwe.

Football fans are worried that the latest dissolution of the board could invite FIFA’s sanctions which may result in the Warriors losing their right to participate at the belated 2021 AFCON finals in Cameroon this January.

Meanwhile, in their statement yesterday, the SRC said they were forced to act after several complaints of violations of the constitution and other controversies. It read in part:

The SRC is also in receipt of a report of alleged sexual harassment of female referees by key technical staff within ZIFA.

Despite several requests for the matter to be decisively dealt with, ZIFA did not give the matter adequate attention in view of its gravity.

Whereas the nation has made significant strides in empowering the girl child to be an active participant in sports, incidences of sexual harassment should be conclusively dealt with to enable a conducive environment for participation by all.

On abuse of female referees, the SRC should have let the public know about it after they had reported to the police with the issue having been in the courts with the culprits behind bars or on bail. Since they have put it out and have used it to make a decision, they may as well tell us the names of these key technical ZIFA staff who harassed the female referees.

Next move , politicians lead politics, academias take charge of education so a Doctos . Let our soccer players lead their own . Where are you Bunjira, Chunga, Chidzambwa, Peter, Madinda, etc. Come on guys justify your existence.You created your own company so get employed there. Kamambo and Gasela join your trade . This our trade.

Next move , politicians lead politics, academias take charge of education so a Doctos . Let our soccer players lead their own . Where are you Bunjira, Chunga, Chidzambwa, Peter, Madinda, etc. Ce C

SRC HAD NO CHOICE BUT TO SUSPEND FELTON KAMAMBO ZIFA BOARD FOR ITS INCOMPETENCE AND CORRUPTION. THE ALLEGATION OF CORRUPTION IS VERY SERIOUS. IT MUST BE INVESTIGATED TO ITS LOGICAL CONCLUSION. IN SPORTS IF A TEAM LOSES TOO FREQUENTLY NORMALLY IT INDICATES THAT THERE IS AN ANOMALY WHICH NEEDS INVESTIGATION.

WHAT DOES THE MINISTER OF SPORTS, MRS KIRSTY COVENTRY'S CONTINUED SILENCE IN THIS MATTER MEAN ? WE ALL KNOW THAT SRC DID NOT TAKE THIS ACTION WITHOUT WIDE CONSULTATIONS. WE NEED TO KNOW HER POSITION BECAUSE FIFA IS GOING TO SANCTION ZIFA. ULTIMATELY MRS KIRSTY COVENTRY, AS MINISTER OF SPORTS IS GOING TO BE ANSWERABLE TO THE SOCCER ZIMBABWEAN COMMUNITY.

I SUPPORT ZIFA BOARD SUSPENSION BY SRC . ZRP MUST NOW MOVE IN WITH SPEED AND INVESTIGATE FINANCIAL CORRUPTION AND FEMALE REFEREES HARASSMENT.

May you please investigate Loga's contract.

Sexual harassment,by the respected Board. Zvinonyadzisa. That's why our National team yanga yava kungo looser pese pese. It was not normal. God and vadzimu ve Nyika vakatsamwa. Shame on you ZIFA. It was better when Chiyangwa was there.

Yah ramba wakadzvanya SRc these guys were disrespecting you yet underperforming. Zvobetserei kuinda kuAfcon kunonyara .better be banned for a year as long as it brings a positive change.

Remember to investigate Loga's contract and payments too.