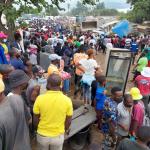 The Zimbabwe National Organisation of Associations and Residents Trusts (ZNOART) said the Government and the Harare City Council (HCC) need to tackle space barons and restore order in Mbare.

This comes after the City of Harare started demolishing illegal structures in Mbare, targeting the Mupedzanhamo Market zone and illegal tuckshops around the bus terminus on Saturday.

Space barons are allegedly selling space to desperate traders in Mbare, with the local authority losing out on millions of dollars in potential revenue.

ZNOART president Shalvar Chikomba said the vendors whose markets have been destroyed are not always the ones to blame as they buy space from space barons. Said Chikomba:

There is a lot of money being made in Mbare, but it is falling into the wrong hands. The traders whose markets have been destroyed are not always the ones to blame because they buy the space from space barons who pocket the money without remitting a cent to Council or Government to refurbish the area.

There are also some greedy merchants who manipulate processes so as to buy produce from farmers for a song.

Council and Government need to get to the bottom of all this if they are to restore order in Mbare because space barons will continue to illegally sell space to desperate vendors.

One of the vendors outside Mupedzanhamo, Motion Mabubu, criticised the council for demolishing their structures without warning. He said:

They should open a new place for us because this place was our source of income. At least if they had told us in advance that they were going to come and demolish our tables we would have removed them nicely ourselves because they are expensive for us to erect.

Another vendor, Ronald Chita, said vending is their only source of income and they will therefore rebuild the illegal structures at the same place. Said Chita:

All we want is a place where we can do our business because that is where we get money for our upkeep.

Schools will be opened soon and our children want school fees so the money comes from here.

We have no option but to start re-erecting our tables here because we have nowhere else to go.