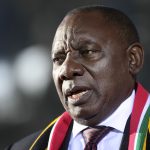 South Africa’s ruling African National Congress (ANC) got less than 50 per cent of ballots cast in local government elections held on 1 November, the lowest it has ever received since the dawn of democracy in 1994.

There was low voter apathy characterised by low voter turnout with only two out of three potential voters registered. Of those, less than half actually cast ballots.

In results announced on Thursday night, the ANC won 46 per cent of the vote, down from 54 per cent in the last municipal elections five years ago. It doesn’t look good for the ruling party ahead of the general elections in 2024.

The ANC will now control fewer councils and have fewer mayors in big and small cities across the country.

If we are to make this a new and better era, we as leaders must put aside our differences and work together in a spirit of partnership, of cooperation and collaboration and common purpose in the interest of the people of South Africa.

Major cities such as Johannesburg and Pretoria have had coalition governments since the last local polls five years ago.

Nationally, the ANC lost a majority in even more regions, including in eThekwini metro in former President Jacob Zuma’s stronghold province of KwaZulu-Natal.

In their coalitions, they agree with the other party they want kuti say in this area we will field a candidate from this party and so the other party or parties support the one.
MDC ALLIANCE, came into being because of this arrangement. They agreed to back President Chamisa in the last election.
Like ZANU PF you we won't field a candidate in Uzumba but will back MDC Alliance, candidate against say COP, ZAPU, ZUM, Mavambo. When the municipality or whatever is being made they make decisions of mutual benefit to the parties in coalition. Each coalition is differentgement depending on agreement.
So in Zim, the only coalition I know is POLAD in which ZANU PF swallowed a lot of other smaller naive parties.
Coalitions are for the mature, selfless and leaders with people at heart not greedy individuals. Greedy leaders feel threatened.

Mind u the coalition they are talking about here is at the municipality not government level.......And as matter of facts Zimbabwe has got such municipalities where ZANU and MDC work hand in hand a good example is Bindura council

Zanu pf the wave is coming