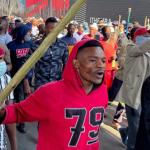 Some South Africans in the country’s Polokwane area, Limpopo Province, have brutally attacked several Zimbabweans following the appearance in court of Themba Prince Willard Dube, who is facing charges of kidnapping and killing seven women.

The 36-year-old Zimbabwean, who is in South Africa illegally, lured the women promising to seek employment for them.

Dube is facing murder, rape, defeating the ends of justice and robbery charges.

The bodies of his victims were discovered in different locations in the bush in Seshego, Polokwane, Mankweng and Westernburg.

A phone he was using allegedly belonged to one of the victims.

Infuriated locals have been captured in various videos stoning people said to be Zimbabweans living in Polokwane.

Saka torovawoka southAfricans living in Zimbabwe, for the reasons dzekuti vanwe vavo are harrassing our innocent brothers and sisters in their country. South Africans are behaving like dunderheads in this regard.

Mmmm. Pakaipa. This is a very difficult situation. All Zimbabweans will obviously be blamed. Xenophobic attacks are dangerous.

They were beaten on e streets not court