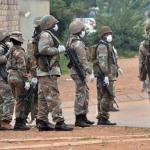 A South African soldier deployed in Mozambique’s Cabo Delgado Province has been killed.

Members of the South African National Defence Force (SANDF) were deployed to fight Islamist militants in the region as part of the SADC mission in the country, code-named Operation Vikela.

In a statement on Tuesday, SANDF Director Defence Corporate Communication, Brigadier General Andries Mahapa, said soldiers came under attack from insurgents during an ambush in the area east of Chai village on Monday. He said:

On 20 December 2021, the South African National Defence Force members deployed in Cabo Delgado Province as part of the SADC Mission in Mozambique (SAMIM), Operation VIKELA, came under attack from the insurgents during an ambush around the area East of Chai Village.

The members managed to fight through the ambush, however, while at the rendezvous awaiting the chopper, they got attacked by the insurgents again.

During this incident, an SANDF member was shot and declared dead on the scene.

The mortal remains of the member were flown back to the SAMIM Chai Tactical Base.

Brigadier General Mahapa added that investigations are being carried out to determine the extent of injuries to personnel and the loss of equipment during the incident.

To true Camaraderie I Salute you for dying to let others make a better life,True Hero of our time real soldier of Fortune .Rest in peace CIA Comrade in arm bravo ,,hats off to u true act of valour 🇿🇦🇿🇦🇿🇦🇿🇦🇿🇦