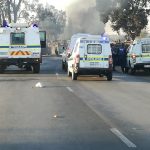 Five inmates have escaped from custody after a group of heavily armed men freed them from a police truck transporting them to court, the police said on Friday.

SAPS spokesperson in Gauteng, Brigadier Brenda Muridili told TV channel Newzroom Afrika that the SAPS officers transporting the inmates to the Vosloorus Magistrate’s Court were overpowered on the way.

Muridili urged members of the public to be very careful as those suspects are armed and very dangerous. He said:

The accused are all Zimbabwean nationals and their names are Nkhululeko Nkomo; Robert Hlatshwayo; Thulani Dube; Augustine Moyo; Mbongiseni Mkandla. We are currently having a team that has been launched so that they can do a manhunt and find the escapees.

The police were outnumbers. It was two vehicles that were involved in this incident. One blocked the police vehicle from the front and a number of armed suspects, with rifles, then indicated to the police officers that they must stop the vehicle.

Police later clarified to IOL that only four were Zimbabweans and the other, Robert Hlatswayo was a South African. She said people from another vehicle that was behind the government truck broke the lock and the inmates fled.

The escapees were going to court on charges including possession of unlicensed firearms, business robbery, attempted murder and shoplifting. They are aged between 30 and 45.

The SAPS has appealed to community members to help them with information to locate the wanted suspects.

He said seven prisoners were being transported from Polokwane Correctional Centre to Mokopane, for sentencing, when four of them allegedly escaped.

Ma shona nema ndebele are one people, Zimbabweans . To hell with tribalism .

Mboko and gaffer pliz keep your useless comments to yourselves. Apologies to everyone offended by these 2 useless assholes. Please know this is not the mindset of us "Shonas".

Kkkkkk I the way they do it .. No one got shot during the escape

We are one people,Shona and ndebele.

Mboko is always out for blood,cause confusion and spread hate. anoda kumbomamiswa mbichana,kungomudzidzisa hunhu soo😠😠. To all my ndebele brothers and sisters especially sisters🤗 this shona loves you very much💜 contact me 0736-------

Pane aba fut zita rangu, but no to tribalism. WHAT UNITES US IS GREATER THAN WHAT COULD EVER SEPARATE US.

@Mugrade 2 Tell that to your Shona brothers they are lost

Peace guys... Ndebeles n Shonas are one... United we stand

I hv to show my profession as a bounty Hunter. These criminals are so lucky I'm working on another case in Zimbabwe