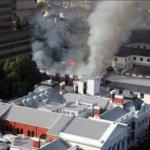 The President of South Africa, Cyril Ramaphosa, has confirmed that a person has been taken in for questioning in connection with the fire at Parliament on Sunday.

Addressing the media outside the National Assembly on Sunday afternoon, the president said:

I believe someone is being held and is being questioned.

The Minister of Public Works and Infrastructure Patricia de Lille confirmed later on Sunday that the 51-year-old suspect taken in for questioning has since been arrested.

De Lille confirmed that the police docket has been handed over to the Hawks for further investigation.

We should be grateful that the National Assembly has not been razed to the floor. Our officials have really acted with great capability and speed.

Firefighters are battling to contain the blaze at Parliament in Cape Town.

The fire broke out on Sunday morning.

Authorities were alerted to the blaze at 5:03 am which is believed to have started in the Old Assembly building. A fire broke out in the same building in March 2021.