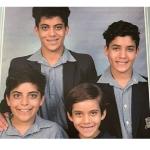 The Moti family reportedly paid R50 million in ransom money to the people who had kidnapped the four Moti brothers to secure the release of the boys.

The four brothers – Zidan, Zayyad, Alaan, and Zia Moti – all aged between 6 -15 – were abducted on Wednesday 20 October 2021 in Polokwane, Limpopo, while on their way to school.

Seven men armed with R5 rifles and handguns blocked the R37 highway, fired shots, and forced the children out of the car.

They were found a week ago after being dropped off on a road in Vuwani, a town in Vhembe District Municipality in the Limpopo province.

There has been a lot of speculation and false information spread about the circumstances around the kidnapping. The Moti family would like to clarify that no ransom was paid. The SAPS was integral to the safe return of our boys, and we are very grateful for their dedication in this regard. Unfortunately, we cannot provide further comment on this as these are sensitive details that pertain to the ongoing investigation.

News24 cited sources, some of them who are in law enforcement with intimate knowledge of the investigation, who said a ransom assured the safe homecoming of the boys.

Reports say bundles of cash totalling R50 million were given to the kidnappers bringing a three-week kidnapping and hostage ordeal to an end.

Sources said the ransom payment was the conclusion of full negotiations between family representatives and the kidnappers.

On the day the boys were snatched on their way to school, their parents were contacted by the kidnappers who instructed them to start gathering their financial resources.

They added that it was more than a week before proof of life was provided: an assurance that the kidnapped children were alive and unharmed, and typically a precursory condition to the payment of a ransom. A police source, who spoke on condition of anonymity, said:

The family got the money together and it was delivered in cash in a bag on the instruction of the kidnappers. It was a dead drop, and the money was left to be collected.

The report did not give the exact date and time of the dead drop.

Police spokesperson Brigadier Vish Naidoo said he was not appraised of any ransom payment.

No arrests have yet been made.