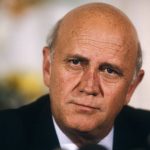 He is the one who negotiated a peaceful transfer of power to a Black-led government under Nelson Mandela, died on Thursday aged 85

His death has attracted divided opinion with some, on one hand, having no nice words for him, while others are paying tribute to him for allowing a transition of power to the black government.

The apartheid sponsored media of South Africa, including the one that black young people supposedly own (405), is spreading fake news by referring to him as a former president; he is a former apartheid President; stop misleading the kids. Fake fake fake.

In the latest statement from his foundation, Archbishop Emeritus Desmond Tutu said:

Mr FW De Klerk could have gone down in history as a truly great South African statesman, but he eroded his stature and became a small man, lacking magnanimity and generosity of spirit.

In a video just released by his Foundation, FW de Klerk, in his final words said apartheid was wrong. He said:

Since the early 80s, my views changed completely… In my heart of hearts, I realised that apartheid was wrong.

Apartheid was the ideology supported by the National Party (NP) government and was introduced in South Africa in 1948. Apartheid called for the separate development of the different racial groups in South Africa.

The whites did great for their fellow white men. Vaidya vese, kukanya vachirangana.

As much as we hate apartheid and other racially repressive policies adopted by european colonialist governments, we have to admit and respect that they what they did for the good of their own kind. Compare that with the African governments that replaced them. De Klerk aiva Murungu and mitemo yake yaiisa varungu pamberi. Varungu vari kutomuchema.

That's true. His folks vari kutomuchema because whatever he was doing was for their good. It was wrong, apartheid was totally wrong, but our leaders ari kuitawo here what's good for the masses? Ipapa pane nyaya...maworkers and villagers whete, for example, zhingzhong buddies are vanotowatya nekushungurudzwa munyika yavo.

Burn in eternal heĺl.your colleagues are waiting for you

Kasi you guys dont have editor as well just like Techzim.check your headline you missed the part "dies".

There is nothing wrong with that heading actually.

Its a summary of his life

even gramma and spelling errors , hezvoo!!

You can say it again. They went to a night school