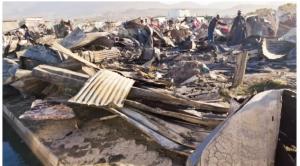 The Western Cape Disaster Management Centre has since put out a call to the Gift of the Givers to assist those in need.

According to the City of Cape Town’s fire and rescue spokesperson, Jermaine Carelse, the team responded to the blaze at 01:23 on Saturday. Fifteen fire-fighting units from fire stations and 50 firefighters extinguished the blaze by 07:24. Said Carelse:

The City’s Fire and Rescue Service was alerted that there were informal structures on fire in Masemola Street.

No injuries or fatalities were reported.

Gift of the Givers, which was on the scene, said preliminary assessments indicated that 152 informal homes had been gutted. Said project manager Ali Sablay:

Our teams were out preparing hot nutritious meals which were delivered at noon with bottled water, blankets, and baby care packs as an initial intervention.

Speaking to News24 from where their homes once were, residents expressed their “hurt” in not being able to salvage what they had inside their homes.

They said fires were a usual occurrence at the settlement and they are always left with nothing.

This is crazy. Why live paurikiziva there are always fires.hope they get all the help they need